This was the hardest one of all.

I love this A Christmas Carol because it makes the story accessible to younger kids (and I love Brett Helquist’s illustrations!).

I love Christmas Is Here because it’s an illustrated version of the Luke 2 account of the nativity.

But I’m going to choose Christmas with the Mousekins because it starts two weeks before Christmas, just about now, and recounts the (easily imitated) preparations and activities in which the Mousekin family is involved. A family with younger kids can use this to help come up with ideas for spending their time before Christmas with their children and help young ones use their anticipation for something other than driving people crazy! This is a great book for browsing and reading in smaller sections! 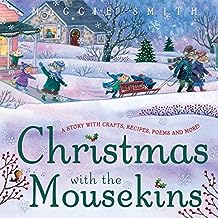 A Baby Born in Bethlehem is the book I think I like the best out of these. Although I don’t have a copy to reread, my previous review reminds me that it’s a seamless, embellished retelling of the nativity story with information gleaned from both Matthew and Luke. The illustrations, while not typically childish, are beautiful, and the story is best as a read-aloud shared with a child or a few children because it’s a little more complicated than a typical picture book. 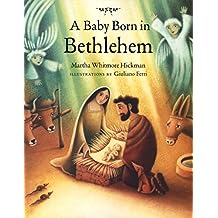 2011: The Christmas Story, by Patricia A. Pingry, illustrated by Wendy Edelson
2012: The All-I’ll-Ever-Want Christmas Doll, by Patricia C. McKissack, illustrated by Jerry Pinkney
2013: Christmas After All: The Great Depression Diary of Minnie Swift, by Kathryn Lasky
2014: Snowed Under and Other Christmas Confusions, by Serge Bloch
2015: Frosty the Snowman, by Diane Muldrow and Rudolph the Red-Nosed Reindeer, adapted by Rick Bunsen
2016: Santa Mouse and the Ratdeer, by Thacher Hurd

I have to go with The Christmas Story on this one! We got this as a gift from a Sunday school teacher, and we used it for several years when the kids were very young as our traditional Christmas Eve reading of Luke 2 since it has a basic retelling with the illustrations, then the text of Luke 2:1-16 (KJV) is printed on the last page.

For Biblical Christmas content, I’d have to say One Wintry Night, with its beautiful illustrations and retelling of the Biblical narrative starting way back in Eden, is the most lovely of these books. But the most accessible–and therefore my choice for young children–is Crispin, the Pig Who Had it All! Crispin is a pig in more than one sense of the word; he is greedy, selfish, and unappreciative…and an actual pig. When he receives an empty box for Christmas which contains “the only thing [he does] not have”, he is furious and dumps it outside. When the empty box draws imaginative neighborhood children in, Crispin is first possessive, then finally interested and engaged. He keeps thinking that the only reason the children come to play is because of what he has, but he eventually realizes that, through shared play, they come to play just because of who he is…a friend. 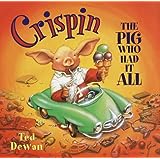 2011: The Secret Keeper, by Anna Grossnickle Hines
2012: Dragon’s Merry Christmas, by Dav Pilkey
2013: Can You See What I See? The Night Before Christmas: Picture Puzzles to Search and Solve, by Walter Wick
2014: The Very Fairy Princess: A Fairy Merry Christmas and Sparkles in the Snow, by Julie Andrews and Emma Walton Hamilton
2015: Carl’s Christmas, by Alexandra Day
2016: Wombat Divine, by Mem Fox, illustrated by Kerry Argent

Once again, I’m torn about these books. I truly love both The Secret Keeper and Wombat Divine! The Secret Keeper shares a little boy’s disappointment about being left out of the secrets at Christmastime and shows how his grandma helped him with his own secrets so he could feel included. Wombat Divine is just a great story about finding where you fit and having the love and support of friends (in this case, a wombat finding just the right role in a nativity play). Either one is a great read! 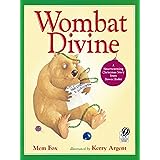 2011: Mousekin’s Christmas Eve, by Edna Miller
2012: 10 Trim-the-Tree’ers: A Holiday Counting Book, by Janet Schulman, illustrated by Linda Davick
2013: Scaredy Squirrel Prepares for Christmas: A Safety Guide for Scaredies, by Mélanie Watt
2014: Listen to the Silent Night, by Dandi Daley Mackall
2015: Where Did They Hide My Presents?: Silly Dilly Christmas Songs, by Alan Katz and David Catrow
2016: A Letter to Santa Claus, story by Rose Impey, pictures by Sue Porter

I really like several of these titles because they’re funny or just fun for kids to read, but my favorite title from Day 7 is Listen to the Silent Night. I always like a well-done nativity story, and this one actually stretches out the whole experience from Mary and Joseph setting off for Bethlehem to the shepherds and wise men doing the same. Its focus on the sounds means many actions are described, and it’s written in poem form, so reading it aloud while your child examines the beautiful pictures is a must!

Grace at Christmas, the book title with a double meaning, is my favorite of this collection. In it, Grace learns that opening your heart and life to others is the best way to celebrate Christmas, and she finds that new traditions that include others are a good addition to the old ones. Best of all, she shows love and hospitality to someone who is feeling alone and disappointed at Christmas, just as we all should!

I love all the Bob Shea books, but at Christmas time, Barbara Joosse’s A Houseful of Christmas wins hands down! The reminder of how a house full of love and family is truly what makes a “houseful of Christmas” is a good one as homes fill with all the personalities and crowdedness that often accompany a gathering of friends or family during the Christmas season. We can all strive to manage what can sometimes be an overwhelming amount of togetherness in the spirit of showing and receiving love from those around us. If there aren’t as many people to gather together as in the past, we can use that as a reminder to cherish the ones we have and to gather more people into our circle of Christmas love! 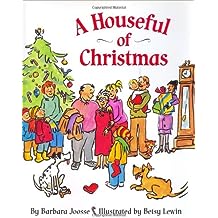 While I have to proclaim My Merry Christmas: And the real reason for Christmas joy (as oddly capitalized as it is!) my favorite, The Christmas Pageant is a close runner-up because of how it summarizes the Christmas story while it shows the preparations and performance of a rural Christmas pageant. My Merry Christmas was a board book I picked up when GirlChild (now 9!) was still just a baby, and I love how it simply presents the Christian symbolism and reasons behind some of our typical Christmas activities. Since the pages are glittery and attractive to little ones and the text is rhymed and brief, it makes a perfect annual read-aloud (even now!) to remind our children of why we celebrate the way we do and the reason we celebrate at all! 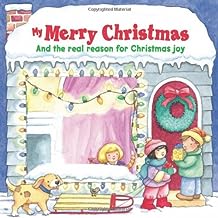 Okay, once again I’m torn between two very different books. On one hand, Christmas Day in the Morning made me cry. On the other hand, my son was Llama Llama Holiday Drama come to life one year. Both are meaningful to me in different ways, of course; Christmas Day in the Morning because it’s so very, very beautiful and moving, and Llama Llama is just so fun to read aloud! I’m going to have to go with both today! 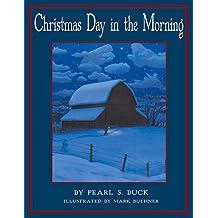 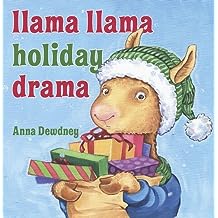